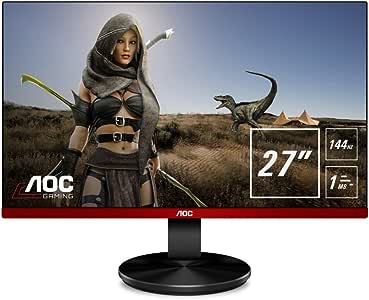 David
3,0 su 5 stelle What a view!
Recensito nel Regno Unito il 12 luglio 2018
Acquisto verificato
what an amazing view this monitor offers, the near bezel-less design really draws your focus into the screen allowing for a deeper immersion during gameplay, or, whatever you are doing on the pc. the screen is bright and the adjustable stand allows you to configure the perfect height to sit the screen for your viewing pleasure... so why 3 stars and not 5?
well here's where it lost 2 stars.
Firstly the 144hz mode (after all that's the real reason you are buying this) the included HDMI lead will not allow the monitor to refresh at this rate you have to buy a display port lead separately (ensuring the lead you buy is able to support this rate also) luckily I already had one to hand also, unlike my Benq monitor, you cannot set the refresh rate quickly and simply by going into Nvidia Control Panel, you must go to the desktop settings find display, then go to advanced, then hit the monitor tab before this option is present.
and as soon as you do a little black border appears around the screen cutting off a couple of inches making this monitor more of a 25" than a 27.
After a little while gaming you get used to it, even with the black border you get easily absorbed into the screen, but that's where I'm a little fussy, if I'm paying for a 27"I want all of the 27"'s (tbf i didn't actually get a measure out and measure the screen with the black border... maybe the manufacturer already took this into account... it is possible I guess)

the second problem comes from the colour saturation and brightness... the colour can look a little washed, again something you easily get used to but for me it was a bit of a deal breaker, the screen is also so bright that about an hour or two into gaming I started to feel a little eye strain, this could also be due to the response time, the manufacturer claims 1ms, but I'm not convinced as I had a very small amount of ghosting (this was more apparent on youtube vids than in games... in games I'm not entirely sure if there was any ghosting at all, maybe I was looking out for it due to the videos and convinced myself it was there when it wasnt.. again it is possible)

the presets on the osd allow an overdrive feature (keep it on normal don't boost it this reduces the chance of ghosting) and some game presets for FPS, RTS and something else, but all they seemed to do was make the screen even brighter, if I played around with the settings I'm sure I could have got the brightness down, but by this time, for me personally it was too late and I was on the phone to Amazon to arrange a return.

Speaking of Amazon, the return department was absolutely fantastic, even though this product came from their warehouse (previously returned item) they still accepted a return based on nothing else than me not liking the product 100%

another thing I will mention is that the packaging this monitor came in (the Amazon box, not the product box) looked like it had a short trip down a few stairs, it was quite damaged on arrival, I've been shopping with Amazon for almost 10 years and its the first time this has ever happened, also I'm pretty certain this was the couriers fault, not Amazon as the guy pretty much threw this box in my hands and made a retreat as quickly as was humanly possible... (guilty conscience much...?)

So there it is. my short review of this monitor, I really wanted to like it. and I'm sure that if you are buying this as a general monitor with maybe some light gaming in mind then you'll probably absolutely love it, but for me, my search to replace my 24" BenQ continues... I would just buy the BenQ 27" but I can't justify the cost at this moment in time... no matter how hard I try.
Leggi di più
18 persone l'hanno trovato utile
Utile
Invio valutazione in corso...
Ti ringraziamo per la tua valutazione.
Siamo spiacenti, ma non è stato possibile registrare il voto. Ti preghiamo di riprovare
Segnala un abuso
Traduci recensione in Italiano

James Lamb
2,0 su 5 stelle 2 monitors, both developed faults.
Recensito nel Regno Unito il 26 agosto 2019
Acquisto verificato
Original monitor developed dead pixels after a few months use. Got replacement easily which was great but replacement does not work at 120hz or 144hz. Vertical lines flashing on right side of the monitor. Tested with another PC and same issue so very certain this is a monitor issue.

When working, monitor is perfectly fine, colors are a bit washed out compared to other monitors I have used.

Richie Taylor
5,0 su 5 stelle Bright, fast
Recensito nel Regno Unito il 16 gennaio 2019
Acquisto verificato
I have a triple monitor system and have had many monitors over the years.

r macarthur
2,0 su 5 stelle Big Disappointment..
Recensito nel Regno Unito il 23 settembre 2019
Acquisto verificato
Bought "As new" for £188 so the price was exceptional. Spent two days trying to configure the display, but couldn't get rid of the ghosting, problems with text when scrolling and wishy washy colours. Maybe it's too clever for it's own good, but set up shouldn't be that big of a problem. Paired it with a GTX1070 which worked fine with my old monitor, so it was'nt at fault.
Leggi di più
Utile
Invio valutazione in corso...
Ti ringraziamo per la tua valutazione.
Siamo spiacenti, ma non è stato possibile registrare il voto. Ti preghiamo di riprovare
Segnala un abuso
Traduci recensione in Italiano
Carica altre recensioni internazionali

bimal
3,0 su 5 stelle Screen flickering..
Recensito nel Regno Unito il 8 dicembre 2019
Acquisto verificato
Screen flickering since day 1, thought it was cause I was pushing my gpu gtx 970 too much. No, it is monitor flickering cause of quality, got rtx 2070 super but still flickers.... Even in game from 2005 wtf
Is there any chance I can get it fixed??
Leggi di più
Utile
Invio valutazione in corso...
Ti ringraziamo per la tua valutazione.
Siamo spiacenti, ma non è stato possibile registrare il voto. Ti preghiamo di riprovare
Segnala un abuso
Traduci recensione in Italiano