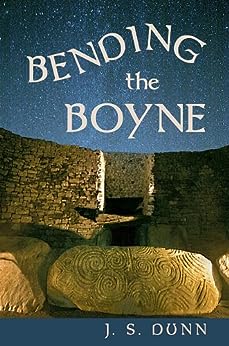 Edizione Inglese di J.S. Dunn (Autore) Formato: Formato Kindle
Visualizza tutti i formati ed edizioni
Sorry, there was a problem loading this page. Try again.
Circa 2200 BCE: Changes rocking the Continent reach Eire with the dawning Bronze Age. Well before any Celts, marauders invade the island seeking copper and gold. The young astronomer Boann and the enigmatic Cian need all their wits and courage to save their people and their great Boyne mounds, when long bronze knives challenge the peaceful native starwatchers. Banished to far coasts, Cian discovers how to outwit the invaders at their own game. Tensions on Eire between new and old cultures and between Boann, Elcmar, and her son Aengus, ultimately explode. What emerges from the rubble of battle are the legends of Ireland’s beginnings in a totally new light.

Larger than myth, this tale echoes with medieval texts, and cult heroes modern and ancient. By the final temporal twist, factual prehistory is bending into images of leprechauns who guard Eire’s gold for eternity. As ever, the victors will spin the myths.

BENDING THE BOYNE draws on 21st century archaeology to show the lasting impact when early metal mining and trade take hold along north Atlantic coasts. Carved megaliths and stunning gold artifacts, from the Pyrenees up to the Boyne, come to life in this researched historical fiction.

The author lived in Ireland and traveled the north Atlantic coasts during the past decade, to research and complete this historical fiction set in the early Bronze Age. --Questo testo si riferisce alla paperback edizione.

Roses are Amber
4,0 su 5 stelle Ancient Eire and it's star-watchers
Recensito nel Regno Unito il 13 novembre 2014
Acquisto verificato
Bending The Boyne is set around 2200BCE in Eire (Ireland) Here live simple folk, stone-cutters, potters, weavers and Star-watchers. These people live with the land and learn from the stars. They have mounds built and carve on stones, they celebrate the Equinoxes and plot shifts of the moon and the sun.

The people of the river Boyne watch as invaders come in boats across the sea in search of copper and gold. The invaders are harsh, brutal and do not understand the simple star-watchers, they declare ownership of the land and tax the people of their crops and animals.

Boann and Cian are the future of the star-watcher people, they both realise that progress is inevitable and change happens, but they go about helping their people in different ways. Boann marries the invader Elcmar and tries to keep an alliance between the two peoples. She is a strong woman who defies the rules the invaders try to bind her by and she always looks out for the star-watchers.

Cian in turn tries to learn the warrior and trading ways of the invaders. He travels to the copper mining areas and learns the art of trading. He crosses the seas to Europe listening and learning. He learns about the value of gold and why the invaders search Eire for the precious metal. He seeks the knowledge so that his people may one day fight the invaders for their rights.

This book draws on myths and legends from many sources as well as historical evidence handed down through the generations. Very in-depth about star-gazing and ancient mounds and megaliths.
Leggi di più
Una persona l'ha trovato utile
Segnala un abuso
Traduci recensione in Italiano

Andy Reynolds
5,0 su 5 stelle Rather a beautiful book.
Recensito nel Regno Unito il 3 febbraio 2016
Acquisto verificato
For those captivated by the physical remnants of the culture of the "Atlantic Fringe". We know only the faintest echoes of stories so this telling is very welcome. Of course it is not a "history" but it weaves the most striking places and objects together in a very entertaining way.
Leggi di più
Segnala un abuso
Traduci recensione in Italiano

Dr. Mark A. Patton
4,0 su 5 stelle A marriage of historical fiction and myth
Recensito nel Regno Unito il 11 settembre 2012
Acquisto verificato
J.S. Dunn's Bending the Boyne weaves together historical fiction (based, essentially, on archaeological evidence) with Irish myth to create an engaging human story set in 2000 BC. At its heart is a conflict between two groups of people: the native Irish "Starwatchers," a peace-loving Stone Age culture led by astronomer-priests, both male and female; and an invading group of copper/bronze using people with a strongly developed warrior culture, an insatiable demand for copper & gold, and a well-established network of trade routes extending the full length of Europe's Atlantic coast. It is told, very much, from the point of view of the "Starwatchers," with two characters in particular taking centre stage: Boann, a young woman in training to be an astronomer priestess, and Cian, the young man who loves her, and is loved by her. They are torn apart when Cian takes the decision to live, for a time, with the invaders, and falls under suspicion: is he a traitor to his own people, or is he really spying for them? He undertakes a long voyage of discovery, taking him to Brittany, the Loire Valley and the Basque country. It is certainly a page-turner and is, in many respects, meticulously researched (the description of Copper/Bronze Age mining activities, in particular, is based very closely on archaeological evidence from sites such as Mount Gabriel, in Co.Cork).

Dunn's inclusion, in the book, of flesh-and-blood characters who later go on to be regarded, in Irish myth, as superhuman heroes, even as gods, challenges us to question just how far back in time the oral traditions that gave rise to later myth might go. He writes in a specifically Irish tradition of storytelling reminiscent of Lady Gregory, W.B. Yeats and, in our own time, Frank Delaney.

If I have a criticism, from a historical point of view, it is the same criticism I have of Bernard Cornwell's Stonehenge. The novel is ostensibly set in 2000 BC, but the society described (large numbers of "invaders" with a warrior culture, industrial-scale mining, sea-crossings directly from Ireland to Brittany) seems more like that of 1800 or 1700 BC. That, however, need not mar anyone's enjoyment of the book as a work of fiction.
Leggi di più
2 persone l'hanno trovato utile
Segnala un abuso
Traduci recensione in Italiano

miffdb
5,0 su 5 stelle Do You Love Historical Fiction...?
Recensito negli Stati Uniti il 20 marzo 2013
Acquisto verificato
...then this is a book that you will enjoy adding to your reading collection. I stumbled across this book during a promotion and was fortunate to purchase it for $.99, but it was worth far more than that in reading pleasure! Set in ancient Ireland during the time of the Druids and Starwatchers, this book will grab you from the first chapter. As I had recently returned from a trip to Ireland, and had visited the Boyne Valley area, Loughcrew, the Hill of Tara, and other passage tombs in the area, I was delighted to find some of those sites mentioned in this book. Based on actual archaeological digs which have unearthed a wealth of treasure in Ireland, the author is a master of blending fact with fiction.
Leggi di più
4 persone l'hanno trovato utile
Segnala un abuso
Traduci recensione in Italiano