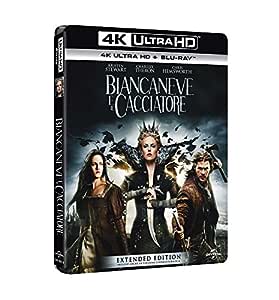 cora
3,0 su 5 stelle Too Much CGI and Waste of some Talented Actors
Recensito nel Regno Unito il 6 aprile 2017
Acquisto verificato
This review is based on the purchase of the following edition:  Snow White & The Huntsman 2 Disc DVD Exclusive Edition .

The story is a darker re-telling of the well known fairy tale by the brothers Grimm. In tune with the darker story line, the colours of the film are also mostly dark and murky, sadly too much so for my liking. Also, the film relies rather too heavily on cgi and special effects. Yes, I understand this is a modern action fantasy film, but it's all not quite good enough to be convincing; at times it is painfully obvious that filming took place in front of a green screen. Paradoxically, when scenes are actually filmed in stunning locations, these are not used to their full potential.

As regards the cast, Kristen Stewart does not work for me at all. She is pretty, but nowhere near beautiful enough as Snow White to outshine Theron. Also, her acting ability is limited. It seems almost cruel to put her on the screen beside such real acting talents as Theron and Claflin, neither of whom is used to their full potential here. Why age and uglify the stunning Theron with the help of computer wizardry instead of using make up and letting her act? As to the use of Chris Hemsworth, he's perfect for the part, but why cast an actor with the physique of a Greek God and then hide him under layers of dirty rags for the entire film? Less cgi and more acting, less of Stewart and more of Theron, more of Hemsworth in less clothes, more of Claflin altogether, and this could be so much better.

The one element I enjoyed without reservation were the dwarfs. What a riot! Well cast and well used. Full marks on that account.

Overall, the story is okay, and the film is nice entertainment for the family on a rainy afternoon. The fight scenes are well done and fun to watch. You'll likely enjoy watching this, just as long as your expectations aren't too high.

The DVD itself is fine. Picture and sound are perfect. There is a feature length commentary, but it's not one of more entertaining ones. Mostly, the makers are giving themselves a pat on the back for their cgi and special effects. The bonus disc contains a few making of featurettes. Nothing special.
Leggi di più
12 persone l'hanno trovato utile
Utile
Invio valutazione in corso...
Ti ringraziamo per la tua valutazione.
Siamo spiacenti, ma non è stato possibile registrare il voto. Ti preghiamo di riprovare
Segnala un abuso
Traduci recensione in Italiano

Throda tzen
5,0 su 5 stelle "We were so poor....." [both the Huntsman & Snow White]
Recensito nel Regno Unito il 17 luglio 2015
Acquisto verificato
This 2012 fantasy has been given a new spin on the traditional fairy tale "Snow White" compiled by the Brothers Grimm. In this version the evil witch Ravenna [Charlize Theron] tricks the King into marriage and immediately murders him imprisoning Snow White in a tower. Years later, Snow White [Kristen Stewart] escapes into the `Dark Forest, pursued by Eric, the Huntsman [Chris Hemsworth] as she sets about to regain her fathers kingdom.
All the usual suspects are included in the mix, the mirror, the dwarves, poisoned apple, fairies, love, unrequited love, friendship and betrayal but not how you'd expect it. The special effects are phenomenal, especially the `Forest' which is really intimidating and Ravenna is sinisterly played to perfection.
Traditionalists may frown but youngsters and adults alike will soon be sucked in by the eerie atmosphere and desperate plight of Snow White. There are some humorous lines, impressive battles, monsters and cute bunny rabbits, but will the Evil Queen be stopped? The 12 rating is appropriate [so take care with younger viewers] for whilst it's a `family' movie, the atmosphere is dark -very dark, and so well done it could upset the more sensitive viewer. A definite ***** despite a few easily overlooked shoddy lines and some script errors.
Leggi di più
4 persone l'hanno trovato utile
Utile
Invio valutazione in corso...
Ti ringraziamo per la tua valutazione.
Siamo spiacenti, ma non è stato possibile registrare il voto. Ti preghiamo di riprovare
Segnala un abuso
Traduci recensione in Italiano

paul allen
5,0 su 5 stelle good film for the family
Recensito nel Regno Unito il 28 agosto 2016
Acquisto verificato
good film, have seen this before on dvd however watching the blu ray version is loads better as quality is great, kids thought the film was great, visual effects were spot on and acting talent to be commended, quite a bit of a twist to what we thought we knew of snow whites story, my 5 year old thought the bit with the mirror was a bit creepy but he is easily spooked.
the addition of a digital copy is very welcome enabling me to easily add to my flixster account to watch whenever and whertever I am through streaming or download
will watch it again. recomended
Leggi di più
2 persone l'hanno trovato utile
Utile
Invio valutazione in corso...
Ti ringraziamo per la tua valutazione.
Siamo spiacenti, ma non è stato possibile registrare il voto. Ti preghiamo di riprovare
Segnala un abuso
Traduci recensione in Italiano
Carica altre recensioni internazionali

Please note however NO DIGITAL COPY. I have requested several times from universal and am ignored. They will give you a new ultraviolet code, but I don't like ultraviolet and will only buy movies with digital downloads.

Charles
5,0 su 5 stelle Wonderful Engaging Inspiring Reinvention of a Old Fairytale as an Epic Fantasy Adventure
Recensito nel Regno Unito il 26 gennaio 2014
Acquisto verificato
I watched this without expecting too much, and was very pleasantly surprised, I was expecting the old fairytale but the plot puts some quite diverse takes on it, keeping to some but in many ways creating a complete new storyline and all the better for it.

Ben W.
5,0 su 5 stelle A Dark & Twisted Tail that Promises to Keep you Enthralled!
Recensito nel Regno Unito il 13 febbraio 2016
Acquisto verificato
In all honesty I had no inclination to watch this film and happened to watch it by chance on TV. I loved it! It's a very dark and twisted version of Snow White and was very entertaining. I decided to buy it for my mum as a Christmas present, she loves Lord of the Rings, and I thought this might be to her liking as well. It turned out that I was right! :-)
Leggi di più
Utile
Invio valutazione in corso...
Ti ringraziamo per la tua valutazione.
Siamo spiacenti, ma non è stato possibile registrare il voto. Ti preghiamo di riprovare
Segnala un abuso
Traduci recensione in Italiano