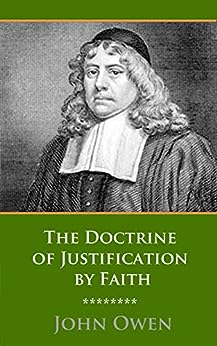 The Doctrine of Justification by Faith (English Edition) Formato Kindle

The Doctrine of Justification by Faith, through the Imputation of the Righteousness of Christ; explained, confirmed, and vindicated

John Owen’s masterly account of justification by faith is straightforward biblical exposition, massive, fresh, compelling and practical. Of all the many Puritan treatments of justification, Owen’s is without doubt the richest.

Chapter I. Justifying faith; the causes and object of it declared

Chapter III. The use of faith in justification; its especial object farther cleared

Chapter IV. Of justification; the notion and signification of the word in Scripture

Chapter V. The distinction of a first and second justification examined

Chapter VI. Evangelical personal righteousness, the nature and use of it

Chapter VII. Imputation, and the nature of it; with the imputation of the righteousness of Christ in particular

Chapter VIII. Imputation of the sins of the church unto Christ

Chapter IX. The formal cause of justification

Chapter X. Arguments for justification by the imputation of the righteousness of Christ

Chapter XI. The nature of the obedience that God requires of us

Chapter XII. The imputation of the obedience of Christ unto the law declared and vindicated

Chapter XIII. The nature of justification proved from the difference of the covenants

Chapter XIV. The exclusion of all sorts of works from an interest in justification

Chapter XVII. Testimonies out of the evangelists considered

Chapter XVIII. The nature of justification as declared in the epistles of St Paul, in that unto the Romans especially.

XIX. Objections against the doctrine of justification by the imputation of the righteousness of Christ

Chapter XX. The doctrine of the apostle James concerning faith and works — Its agreement with that of St Paul
Leggi di più
Previous page
Next page

John Owen (1616–1683) was an English Nonconformist church leader, theologian, and academic administrator at the University of Oxford. On 29 April he preached before the Long Parliament. In this sermon, and in his Country Essay for the Practice of Church Government, which he appended to it, his tendency to break away from Presbyterianism to the Independent or Congregational system is seen. Like John Milton, he saw little to choose between "new presbyter" and "old priest." He became pastor at Coggeshall in Essex, with a large influx of Flemish tradesmen. In March 1651, Cromwell, as Chancellor of Oxford University, gave him the deanery of Christ Church Cathedral, Oxford, and made him Vice-Chancellor of Oxford University in September 1652; in both offices he succeeded the Presbyterian, Edward Reynolds. During his eight years of official Oxford life Owen showed himself a firm disciplinarian, thorough in his methods, though, as John Locke testifies, the Aristotelian traditions in education underwent no change. With Philip Nye he unmasked the popular astrologer, William Lilly, and in spite of his share in condemning two Quakeresses to be whipped for disturbing the peace, his rule was not intolerant. Anglican services were conducted here and there, and at Christ Church itself the Anglican chaplain remained in the college. While little encouragement was given to a spirit of free inquiry, Puritanism at Oxford was not simply an attempt to force education and culture into "the leaden moulds of Calvinistic theology." Owen, unlike many of his contemporaries, was more interested in the New Testament than in the Old. During his Oxford years he wrote Justitia Divina, an exposition of the dogma that God cannot forgive sin without an atonement; Communion with God, Doctrine of the Saints' Perseverance, his final attack on Arminianism; Vindiciae Evangelicae, a treatise written by order of the Council of State against Socinianism as expounded by John Biddle; On the Mortification of Sin in Believers, an introspective and analytic work; Schism, one of the most readable of all his writings; Of Temptation, an attempt to recall Puritanism to its cardinal spiritual attitude from the jarring anarchy of sectarianism and the pharisaism which had followed on popularity and threatened to destroy the early simplicity. --Questo testo si riferisce a un'edizione alternativa kindle_edition.

"That we are justified by faith, is so frequently and so expressly affirmed in the Scripture, as that it cannot directly and in terms by any be denied."

"The nature of justifying faith, with respect unto that exercise of whereby we are justified, consists in the heart's approbation of the way of justification and salvation of sinners by Jesus Christ proposed in the gospel, as proceeding from the grace, wisdom, and love of God, with its acquiescency therein as unto its own concernment and condition."

"The design of God in and by the gospel, with the work and office of faith with respect thereunto, farther confirms the description given of it. That which God designs herein, in the first place, is not the justification and salvation of sinners. His utmost complete end, in all his counsels, is his own glory."

"If we are justified through the imputation of the righteousness of Christ, which faith alone apprehends and receives, it will not be denied but that it is rightly enough placed as the instrumental cause of our justification."

"The righteousness of Christ (in his obedience and suffering for us) imputed unto believers, as they are united unto him by his Spirit, is that righteousness whereon they are justified before God, on the account whereof their sins are pardoned, and a right is granted them unto the heavenly inheritance."
Leggi di più
4 persone l'hanno trovato utile
Segnala un abuso
Traduci recensione in Italiano