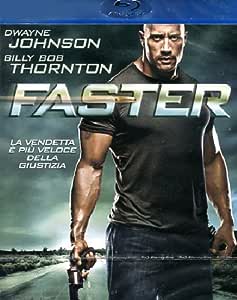 FeedMyReads
4,0 su 5 stelle An action film with a conscience
Recensito nel Regno Unito il 10 luglio 2017
Acquisto verificato
Dwayne Johnson has over the past few years become a big name in the world of film and I had not really checked out too much other than his role in the Fast and Furious franchise so I decided to give this a shot to see why he has become a big thing recently.

This film sees Johnson playing a man recently released from prison who seeks vengeance on those who wronged him by setting out with a car and a gun to work through his targets. What Johnson doesn't realise is he himself has now become a target for a contract killer and for the police too. Johnson has to battle with the knowledge of what will happen to his soul due to his taking vengeance on others and so although this is a great action film it has the interesting twist of someone having a conscience that is making another dynamic to this film that many others don't have.

Lyndsey OHalloran
4,0 su 5 stelle Exciting and action packed
Recensito nel Regno Unito il 25 marzo 2013
Acquisto verificato
Faster has a fantastic beginning. With Driver, played by Johnson, just getting out of prison, you wonder what the hell he did. There were questions in my mind as to whether or not he would be the good or bad guy. It doesn't take long for the action to get going though and I soon realised that this guy was definitely out to get revenge for something or other. Johnson is great in action films as I said before. He has that determination behind him, the body to pull off being a tough guy and he also looks really mean a lot of the time. While I don't think this is the best role Johnson has ever been in, he was extremely convincing as Driver and pretty scary at the same time.

Starring opposite Johnson is Billy Bob Thornton who plays Detective Slade Humphries. Not too much is known about Humphries to begin with, apart from that he comes across as a loser cop, someone not doing too well in his career. For the whole film, I was sat thinking there has to be more to this guy than meets the eye and slowly, the film reveals information about his home life and why he is on this particular case. Billy Bob Thornton was ok but only that for me. He was a good character, especially as the complete opposite of Driver but I wanted more from him.

What I wasn't expecting from this film was some serious eye candy. Oliver Jackson-Cohen plays the hit man known as Killer. As soon as he came on the screen, the words `yummy' left my mouth. My fiancé thought it was quite funny. No one knows why Killer is after Driver, only that he has his name because he never misses and is fast as hell. Oliver Jackson-Cohen isn't only nice to look at though. He has this whole Jake Gyllenhaal/ Ryan Gosling thing going on and is the suave and sophisticated kind of hit man... if there is such a thing. He was also mysterious which I liked about him.

The plot was pretty basic, if I'm honest, even though it tried to have more mystery than was really there. The basic plot is that Driver wants revenge for his brother's death which leads him to driving all over the place killing everyone on his list. The ways in which he kills them aren't even that exciting or different either. Somehow though, I thoroughly enjoyed this film. Everything happens pretty quickly, with Driver going from one target to the next. For a long time though, there is the mystery of what actually happened and why he wants the revenge so badly which I think is what keeps this film going. I really enjoyed how everything turned out, especially as all of the questions were answered well. There is plenty of character development but only for Driver but I didn't mind that. I didn't really care about the other characters anyway.

David Leese
3,0 su 5 stelle Nothing like Fast and Furious
Recensito nel Regno Unito il 6 aprile 2019
Acquisto verificato
This film is good, on its own premise. But do not be misled - the film stars Dwayne Johnson and it's called Faster, but it is absolutely nothing like Fast and Furious. It's a tense, violent thriller starring a serial killer out on a vendetta. There are no light moments, no comic relief and no let-up in the tension. It's a very good thriller for its genre, but it's not an extended car chase with stunt driving and it's extremely violent.
Leggi di più
Una persona l'ha trovato utile
Utile
Invio valutazione in corso...
Ti ringraziamo per la tua valutazione.
Siamo spiacenti, ma non è stato possibile registrare il voto. Ti preghiamo di riprovare
Segnala un abuso
Traduci recensione in Italiano

Keith
3,0 su 5 stelle Passed the time, but not an exceptional movie
Recensito nel Regno Unito il 28 dicembre 2011
Acquisto verificato
In the mood not to be tasked mentally, enjoy some action, this worked for me. Cliche plot of revenge. No one breaks into a sweat (I wondered if it would have been better with Jason Statham - more combat and stunts). The Rock is great for looking awesome but this didn't call on his acting skills. This movie probably came in under budget. In my youth, this would have been the "B" movie to the main feature. Watch with mates, pop a few beers.
Leggi di più
2 persone l'hanno trovato utile
Utile
Invio valutazione in corso...
Ti ringraziamo per la tua valutazione.
Siamo spiacenti, ma non è stato possibile registrare il voto. Ti preghiamo di riprovare
Segnala un abuso
Traduci recensione in Italiano