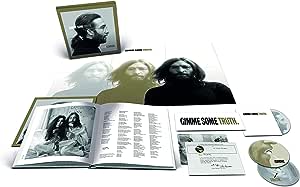 Quiverbow
5,0 su 5 stelle EIGHTY!
Recensito nel Regno Unito il 9 ottobre 2020
Acquisto verificato
Eighty years! John Lennon would have been eighty years old. I still find it hard to believe that he’s been gone for half that time, an event that still shocks many people, and now we can only be grateful for what he left us with. Released in five editions, this is the deluxe version.

Missing just one A-side, half the tracks here were issued as singles (and he only ever released 11 in his lifetime), with three more that were B-sides, and the rest being good selections from his albums, this is, for all intent and purposes, a ‘greatest hits’ compilation, though I doubt it will be promoted as such. Many might say “So what?” Well, everything has been remixed to delight our aural senses. As with most remixes, you get to hear previously buried sounds and has you thinking it was all recorded last week. It makes ‘Instant Karma’ and ‘Power To The People’ sound more powerful than you previously imagined. ‘Cold Turkey’ has you feeling his pain of withdrawal, but I don’t think live versions mix well with studio songs, so ‘Come Together’ does seem a bit out of place. And I can live without hearing ‘Happy Xmas’ ever again.

The 5.1 surround and Dolby Atmos mixes sound even better, though, truth be told, if you don’t have the equipment for those, you will be paying for something you can’t benefit from. In addition to the discs is a sumptuous 124 page book that details all the songs in the words of John and Yoko and others who were there, with an abundance of photos of lyric sheets, tape boxes and plenty of bits and pieces, many of which have not been seen. Oh, you also get a bumper sticker, two postcards and a poster in this deluxe edition.

I do think the title could have been different, as there was a four CD set with the same title released back in 2010. Be that as it may, if you’re a committed Lennon fan, even though you’ll have everything here (unless you have ‘Imagine – The Ultimate Collection’, not in this remixed form), you know it will end up as part of your collection. If you’re merely dipping your toe in to his solo work, in which case where have you been for the last five decades, there is no better place to start than this.

Note: Within the book it states (twice) that the four songs taken from ‘John Lennon/Plastic Ono Band’ included here are also available on the “six CD, two Blu-ray and book ‘Ultimate Collection’” of that album. At the time of writing (his birthday) this is news to me and, I would guess, everyone else, so do we have something else to look forward to?

Dr Tolstoyevsky
5,0 su 5 stelle Awesome Box Set & Superior Sound Quality
Recensito nel Regno Unito il 10 ottobre 2020
Acquisto verificato
I have most (if not all) of Lennon’s previous releases & I was a little unsure whether this particular production would offer something different. Having received it today I can honestly say that: yes, it does offer an improved sound quality. No doubt about it! This collection of songs have all been remixed (above and beyond a mere remaster) and the sound is - I promise you - vastly improved. Sonically, this collection is second to none.
I decided on the box set which comes with a poster, two postcards, a sticker and a glorious hardback book. It’s very well produced and obviously well thought-through.
If the music is all you are interested in, you can purchase a double CD set. If, however, you’re a big Lennon fan then the postcards, book etc are something you WILL want in your collection.
Overall, the sound is a huge improvement on what’s been previously available and the extras (in the deluxe set) are a real treat!
I’m my humble opinion you can’t go wrong at under £50!
Buy ‘n’ Enjoy!
Leggi di più

lefty
5,0 su 5 stelle The Best these songs have sounded
Recensito nel Regno Unito il 19 ottobre 2020
Acquisto verificato
Fantastic collection of John Lennon classics remixed really well. I’ve heard these songs many times over the years, but this new compilation gives them a new life, the clarity of the music is amazing and John’s voice is Crystal clear. Most fans will be aware that Lennon had a complex about his own voice and so in the original mixes of many of his songs, the vocals are set back, instead of being upfront,

Thankfully, this has been corrected in these new remixes and now, you can here the words perfectly,

The cd deluxe set comes in a beautiful hardback slip case with a hardback 124 page book which gives details of each song and recording sessions along side loads of wonderful photographs,

The 2 CDs and blu ray disc are housed in a separate port folio style wallet which carries the same artwork as the outer box and also holds a large fold out poster, 2 postcards and a bumper sticker,

A really lovely package for under £50 and the music of course is timeless!
Leggi di più

Jameson VII
5,0 su 5 stelle Watching The Wheels
Recensito nel Regno Unito il 15 ottobre 2020
Acquisto verificato
So this is one superb box set. The new blu-ray audio mixes bring even more clarity to Lennon voice and enhancing all the tracks at the same time. The book is a good read with some never seen before photos. A must for any John Lennon/Beatles fan. My only little grip is on the track Grow Old With Me. They have done a half mix from the Lennon box set and the orchestra version from the 2005 Working Class Hero album. The orchestra version is crap too be honest and they should have just remastered the basic Lennon box set version, but hey what do I know. As for the rest of the tracks they will blow you away.
Leggi di più