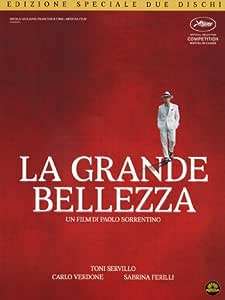 J. L. Sievert
5,0 su 5 stelle Mellifluous
Recensito nel Regno Unito il 2 ottobre 2020
Acquisto verificato
The Great Beauty in English, or the more mellifluous La Grande Bellezza in Italian, a sonorous language loved by lovers and troubadours. What greatness do we encounter in this modern Italian classic, an Academy Award winner for Best Foreign Picture in 2013 whom many critics compare to “La Dolce Vita” and “La Notte”? We encounter Rome and its crumbling or crumbled beauty. We see its greatness here, grand faded visions of a glory that made it what it was.

Jep Gambardella is 65 now and looks it, or looks even older. He’s tattered around the edges, worn down by life, particularly the high life of Rome. What is that high life? It’s hedonism, narcissism, debauchery. It’s all-night rave parties on the rooftops of swank hotels. It’s play with feminine flesh in bordellos. It’s cynical chat with the literati about the pointlessness of modern civilization, the corruption of politics and the emptiness of culture. It’s life lived for the thrills of pleasure in the absence of love and compassion, an absence shared by a modern church, a Roman Catholicism obsessed with itself in the form of rituals and saints and little else. In this void, this emptiness, this vacuum, Jep exists. He endures somehow.

This has been his life for the past 40 years. He came to the great city as a callow young man in his mid-20s. He was bright, well educated, ambitious. He carved out a niche for himself as a journalist and novelist, though he only published one well-received novel long ago. Why didn’t he continue to write fiction? Because, he said, he put everything he had into that one book. It was his testament. It said all he had to say. Others disagree, those who adored the book and adore him still for writing it. They urge him to continue but he doesn’t because he’s spent.

His face looks wise but weary, battle scarred with deep lines in it. He used to smile but doesn’t much anymore because his face works against it. It’s set in its ways now, a disapproving face he carries critically through Rome.

He was a great journalist too, not just a great writer of fiction. He has the kind of mind that’s bold and incisive enough to ask the right questions, to get at certain truths, the sort that make people uncomfortable because they don’t want to think about them. That’s the problem with good journalism. It gives the world mainly what it seldom wants — hard truths. Fiction, myths, fantasies and delusions are easier to live by. What you believe makes it real even if it isn’t, even if it’s a lie you accept as true. The last thing you want is good journalism. The debauchery of the high life or any other substitute is better.

So Jep is adored and feted, but also avoided and detested. He is too good at what he does and makes people squirm. They want to keep their secrets and, like any good interrogator, he’s out to steal them. But he seldom does the journalism anymore, despite the encouragement of his editor. The odd freelance piece then, maybe, but not much more. Instead, his life seems spent.

The film goes on in this desultory fashion for the first half. It seems to be going nowhere if nowhere is in circles. Party after party. Rave after rave. Drunkenness. Cocaine snorting. Fornication. Not done by Jep per se, but by many around him at these soirees. It all looks so empty, so pointless.

But, as with all good stories, something happens. A shift in tone, a change of emphasis. In this case a death. Halfway through these proceedings that death jars Jep awake. The deep lines in his face now become tiny rivulets of tears.

Who has died? Her name was Elisa. Jep met her on a bright shore of the Mediterranean when he was just a lad of 18. She was young too. He adored love, or the notion of it, but didn’t have it. Not until he met Elisa. She was the first, the greatest, the deepest. She was the love he yearned for.

Why didn’t he marry her? That question is not quite answered in the narrative. Somehow there were complications, it seems. Somehow the job didn’t get done. Elisa married someone else instead, not Jep but a man named Alfredo Marti.

Now, all these years later Alfredo is broken up by the death. He adored Elisa too and comes to Jep with his pain. But the pain, it transpires, is not just Alfredo’s. It’s Jep’s as well. Both men loved her, each in his own way. Jep was passionate, a genuine romantic. Alfredo was devout, forever constant. Elisa chose this constancy but never stopped loving Jep despite it. She carried the flame of that love throughout her life. Alfredo knows it too because he found her diaries after she died. They were locked in a chest and Alfredo broke the lock. Even so, having read their contents, he doesn’t hate Jep for that love. If anything, he appreciates him, glad that through circumstances Jep allowed him to keep her. He didn’t interfere by pursuing her after she left him. That was Jep’s error and weakness. We know this now because he never stopped loving her either.

So the second half of the film is softened by fond and loving remembrance. There are some flashbacks to his youth, and Elisa is the beauty he remembers because we see her too along the beach, her skin tanned by the summer sun, her long auburn hair radiant with sunlight. Bella madonna in the flesh. Jep was smitten and right to love her.

With this softening the beauty of Rome wakes up. It too comes into the light. Jep sees it with fresh eyes and wonders how he didn’t before. He lived in it, was swallowed up by it, never seeing it like this. The play of light on water. The look of buildings and the spray of fountains. The art on gallery walls everywhere, an art now inviting and embracing, no longer pretentious and ostentatious to the cynical mind.

The funeral is bleak. Both broken men are there. Each now will mourn in his own way. Alfredo will continue his lamenting, but a different way will unfold for Jep. The past is dead and can never be retrieved. But it still exists in memory to be savoured if one wants it that way. Jep now wants it that way. He will draw strength and goodness from it. He will look at life differently. He will open his eyes and discover, as if for the first time, the great beauty that is Rome.

Charles Vasey
5,0 su 5 stelle My Heart's In The Highlands
Recensito nel Regno Unito il 1 marzo 2015
Acquisto verificato
Paulo Sorrentino's films build up slowly, in this case operating with pulses of action from party to night time walks in Rome to surreal interiors and exteriors and back again. Accompanied by wonderful photography and a fine score the story circles rather than progresses around the life of Jep Gambardella, a socialite journalist whose career (if such it be) is based on one novel and a lot of acquaintances. But it is also an excuse to peregrinate around Rome, a city that appears almost as an organism unchanged by its human inhabitants. This is not narrative cinema, but it is very good.
Leggi di più
10 persone l'hanno trovato utile
Segnala un abuso
Traduci recensione in Italiano

Agapanthus
3,0 su 5 stelle Good film
Recensito nel Regno Unito il 8 febbraio 2019
Acquisto verificato
This is supposedly a great film: I didn't really like it, although I do acknowledge that it is well-made and acted. Just a little strange and it wasn't for me. I didn't like the characters (that was the point, I think).
Leggi di più
Una persona l'ha trovato utile
Segnala un abuso
Traduci recensione in Italiano

square eyes
5,0 su 5 stelle The Sweet Life...or is it?
Recensito nel Regno Unito il 14 marzo 2015
Acquisto verificato
It was strange to watch this film one evening and the next day to read in the travel section of the New York Times an article on Rome which actually mentions the film in the opening paragraph. It was a strange coincidence that would have fitted aptly into the film itself. The film has many echoes of La Dolce Vita and nocturnal events that punctuate the storyline of a man reflecting on age and the past. It is the sort of film that merits a second or even third viewing. If you like Italy and its cinema this is probably for you.
Leggi di più
2 persone l'hanno trovato utile
Segnala un abuso
Traduci recensione in Italiano
Visualizza tutte le recensioni
Consegne illimitate in 1 giorno
Iscriviti ad Amazon Prime: consegne senza costi aggiuntivi in 1 giorno su 2 milioni di prodotti e in 2-3 giorni su molti altri milioni, film e serie TV su Prime Video, incluse le serie Amazon Original, più di 2 milioni di brani e centinaia di playlist senza pubblicità con Prime Music, centinaia di eBook Kindle su Prime Reading, accesso anticipato alle Offerte Lampo di Amazon.it e spazio di archiviazione per le foto illimitato.
> Scopri