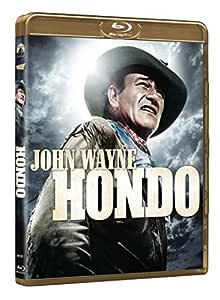 KaleHawkwood
5,0 su 5 stelle Wayne never better, the West never more haunting
Recensito nel Regno Unito il 7 giugno 2014
Acquisto verificato
1953 was the year the latest techniques in 3-D were tried out, Hondo being one of the guinea-pigs. You`d hardly know it, since the facility is used sparingly, and the film is already vivid and beautifully photographed, mostly by Robert Burks, until John Ford took over for the final scenes when main director John Farrow had to honour another contract.
I've never seen Wayne quite so tender or so restrained as here. Those who still maintain he wasn't much of an actor should watch this, Red River and Rio Bravo, then get back to the rest of us who know he was one of the finest film actors who ever drew breath or a gun.
He plays a cavalry rider in the South-West named Hondo Lane, who is first seen exhaustedly walking towards us out of the plains, his eccentric dog in tow, into the life and solitary shack of Angie Lowe, mother of son Johnny, and lonely wife to a ne'er-do-well who hasn't been seen for days.
She's played, in her feature debut, by Geraldine Page - later almost an American institution renowned for her intense stage roles - and she makes a change from the usual 'Wayne-bait', being both quietly tough and genteely dignified. It's a good match, and is surely one of the reasons why this was in fact Wayne's favourite among his own films.
Johnny is acted well by Lee Aaker, while the errant husband is played by Leo Gordon, with the young James Arness as a cavalry officer.
They are both caught between the cavalry and the Apaches, who are portrayed and treated more sensitively here than in most westerns of the period. The Apache chief is played brilliantly, and with some subtlety, by Australian actor Michael Pate.
That ornery old stalwart Ward Bond plays to the hilt a rugged, rowdy old pal of Hondo's, whose reply when asked if he's ready is: "I was born ready!"
The screenplay is by Wayne's writer of choice, the pithy James Edward Grant, and Farrow (and Ford too) direct with a masterly eye for landscape and composition. Some shots, and entire scenes, take your breath away.
It's an unusually thoughtful western, with a slightly abrupt denouement, though that simply leaves you wanting more, as well as wondering how they're all going to fare, as they ride off...
The extra features are exceptional for an old 80-minute western: a 'Making of' featurette, a short affectionate profile of Ward Bond, and a fascinating one of writer Grant, plus a commentary and a short but welcome outline of the history of the Apache tribe. There are interviews with the grown-up Aaker, remembering fondly being chucked into a river by Wayne in the 'unorthodox swimming-teaching' scene, as well as the likable Pate recalling his role as the Apache chief.
"A man oughta do what he thinks is right" says Hondo/Wayne some way into the film, and I`m very glad he thought it right to make this beautiful yet strangely modest film. It`s one of the highlights of his saddle-sore career.

Amazon Customer
5,0 su 5 stelle Well worth the wait from the United States.
Recensito nel Regno Unito il 5 marzo 2020
Acquisto verificato
Considering this product is made to order and also the age of the show. I remember watching this with my late father in the 1960's. It is a very good quality print on the 4 episodes I have watched so far. The series main character Hondo Laine expanded on the film version which starred John Wayne. This is a boxed version as wide screen productions where mainly a product of the big screen until resent years. All in all a nicely produced box set of a fondly remembered TV series of the past.
Leggi di più
Utile
Invio valutazione in corso...
Ti ringraziamo per la tua valutazione.
Siamo spiacenti, ma non è stato possibile registrare il voto. Ti preghiamo di riprovare
Segnala un abuso
Traduci recensione in Italiano

Samuel Barber
2,0 su 5 stelle A good script, but not necessarily a good movie
Recensito nel Regno Unito il 1 luglio 2014
Acquisto verificato
Filmed in 3D Warnercolor, the script alone presents a story of an inter-racial relationship. However, I didn't believe John Wayne as a half-Indian who looks the same and talks the same as any other movie he's in. He plays the part well, but he's just not believable as a half-Indian. It's an example of how a good script can be turned into a mediocre movie.
Leggi di più
Utile
Invio valutazione in corso...
Ti ringraziamo per la tua valutazione.
Siamo spiacenti, ma non è stato possibile registrare il voto. Ti preghiamo di riprovare
Segnala un abuso
Traduci recensione in Italiano
Carica altre recensioni internazionali

Robert G. Beechey
4,0 su 5 stelle I first saw this, when it first came out ...
Recensito nel Regno Unito il 13 luglio 2014
Acquisto verificato
I first saw this, when it first came out, in 3D. I was just a kid back then and apart from involuntary ducking I remember very little and was eager to catch up. The idea of John Wayne as a half breed was interesting and the relationship between John's character and that of Geraldine Page was very well done. The relationship between that family and the Indian chief Vittorio was also interesting. A pity then that these unusual and well-crafted stories disappeared I the 3rd act to become a standard Indians circling the wagons actioner. However, overall, as a thoughtful, colour, 3D movie of the time it really stands out.
Leggi di più
Utile
Invio valutazione in corso...
Ti ringraziamo per la tua valutazione.
Siamo spiacenti, ma non è stato possibile registrare il voto. Ti preghiamo di riprovare
Segnala un abuso
Traduci recensione in Italiano