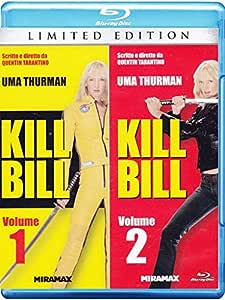 I due film in un'unica confezione

Jason Brown
5,0 su 5 stelle My dogs don't like Tarantino
Recensito nel Regno Unito il 1 maggio 2019
Acquisto verificato
I'm a big fan of the Kill Bill movies so you can imagine how excited I was to get my hands on both movies in glorious full HD. Sadly it was clearly never meant to be as my dogs decided to 'kill bill' themselves by ripping the package to pieces and depositing what was left around my garden. I attribute no blame to either Amazon or my postman - both fulfilled their end of the bargain. My dogs, however, are clearly some of the harshest movie critics in the business. Quite why they took an exception to two of Tarintino's finest movies is beyond me - maybe they disliked the casting, the fight choreography or perhaps they're just like sh*ts. I'm going for the latter...
Leggi di più
8 persone l'hanno trovato utile
Utile
Invio valutazione in corso...
Ti ringraziamo per la tua valutazione.
Siamo spiacenti, ma non è stato possibile registrare il voto. Ti preghiamo di riprovare
Segnala un abuso
Traduci recensione in Italiano

Tv_S
5,0 su 5 stelle Wonder what a Royale with cheese is called in Japan?
Recensito nel Regno Unito il 3 maggio 2013
Acquisto verificato
If you new to these movies I would like to point out that Kill Bill volumes I & II should be viewed as one complete film as opposed to a prequel/sequel affair. This boxset is best enjoyed by watching one immediately after the other to take in the full story.

Kill Bill is an out & out tale of revenge and retribution, this is dished out by our main protagonist 'The Bride'. Directed by the fantastic Quentin Tarantino, Kill Bill is heavily influenced by the 1973 Japanese movie Lady Snowblood, which is developed from Japanese Manga, so this should give a flavour of the kind of action scenes within the movie. Gore, spurting blood and swordplay are all prevalent in the movie, so beware if you haven't seen the film and this is not your thing. As always though we are treated to gems of dialogue and character interaction from the modern day master of this technique, although there may not be as many classic pieces of script writing as say, Pulp Fiction or Reservoir Dogs, there are still some quality exchanges, in particular the Superman conversation during volume 2 being one of my favourites. Performances by the cast are all rock solid, and they help the film to flow along easily, Tarantino has once again used actors from other films he has been involved with, but in my eyes this is certainly no bad thing.

The film itself certainly has a comic book style, with a huge nod to the 70's Hong Kong chopsocky flicks of years gone by. My particular favourite parts of the film are the training sequences with Pei Mei, a truly terrifying mentor and character. If your a fan of old martial arts movies, you'll see the reference here to films such as Jackie Chan's - Snake In Eagles Shadow & many others. The soundtrack throughout the movie also features similar old sound effects that used to be heard on the old Shaw Brother and Golden Harvest movies, check out the very start of 'our main feature presentation' to be taken right back in time.

Kill Bill on Blu Ray features many different filming techniques, and at times we are watching in black & white for atmospheric and flashback sequences, these tend to include lots of film grain, although picture quality is not foresaken at its expense. Close up shots feature great detail, blacks levels are inky black and the grain effect creates the impression that we are indeed viewing the movie on film. From this we can be immediately transported back into a techno colour, neon filled Tokyo all sparkly and shiny, or even switched to a beautiful and rewarding anime section featuring The Brides main adversary in the first episode. The Blu Ray version of this movie is exceptional, and is a huge improvement over the DVD versions of the film. Watch out for a black & white scene that is immediately followed by a view of a desert landscape, this highlights the differences in technique and really makes the blue sky and sandy, rocky surfaces come alive, total eye candy! In another scene we see The Bride in bright yellow motorcycle leathers & jumpsuit that pays homage to Bruce Lee & Game Of Death, the bride takes on all-comers in furious battle, the enemies are all sporting black suits that make The Bride jump out from the screen as the contrasts in clothing and colours clash. The scene then morphs in to one of silhouetted characters brawling against a blazing blue backdrop in one amazing scene. This is the kind of experience that your Blu Ray player was made to produce, and is a good test for your kit, along with being one of many of the numerous highlights of this movie.

Sound quality is once again excellent, and as always, music plays a huge part in Tarantino's flick. Although it doesn't have a play along soundtrack as we have in Reservoir Dogs, the music perfectly suits each scene and compliments the movie perfectly. With swords clashing on many occasions you can almost feel the danger and sharpness of the Hanzo Hattori swords swooshing and slicing the air around you. Punches, kicks, throws and thuds also sound amazing & will keep your home theatre active throughout the movie. With dialogue being so important in Tarantino's movies its reassuring to know that this is also crystal clear and reproduced faithfully.

I haven't checked any of the extras on this box set yet, so I'm not sure what is available on the disc and the quality of them, so I can't make comment on those.

So regardless of if you haven't seen Kill Bill before, or you are thinking of upgrading to the Blu Ray experience, in which case you will be able to view the movie in a whole new light, because you haven't really 'seen' it until you have experienced it in Hi Def, then I can give this one a big thumbs up!

It was because of viewing this movie in Blu Ray that I calibrated my T.V. There are a couple of scenes that are on the disc that allow you to check out your black and colour levels. The scene mentioned in the review during the restaurant battle that features The Bride in silhouette fighting the crazy 88 is one good example for seeing how deep and inky your black levels are. But there is also another great example:

Without spoiling the film, there is one particular scene that is underground, and we see nothing but soil, roots and blackness. When I first watched the scene as the camera pans down the sheer blackness, I was very disappointed with the washed out, grey appearance of what should have been a thick inky and deep black, the scene is very claustrophobic intentionally, and the fear of this darkness is what Tarantino is trying to give you, to help you feel what the character is experiencing during the scene. It was this that spurred me on to calibrate my T.V. Now this can be done professionally at expense (ISF), which will of course give you the optimum results. However, you can also perform some calibration yourself to achieve much better results than the standard settings give performance wise. Most T.V's are shipped from the store pre-set to achieve an eye catching display against the other competition they face, this results in a higher power usage, lower life span, and a poorer performance for your T.V within your home environment, as well as being detrimental to achieving the best picture obtainable for Blu Ray.

All Sony Blu Ray discs have a secret easter egg calibration feature within their main menus, this is accessed by pressing '7669' on your remote (or triangle 7669) [Return] on Playstations, a series of calibration screens will then appear to which you can pause and adjust your T.V settings, don't worry you will not damage the T.V. and everything is user adjustable. One word of warning though, DO NOT attempt to adjust advanced or engineer settings if you are unsure of your capabilities. THX enabled discs also include a calibration feature, but you will need to use blue level glasses to calibrate correctly using THX. Once you have discovered these calibration screens you can check on youtube for help and assistance in adjustments. One other piece of advice is to adjust the T.V settings at the time of day and under the conditions you mostly view the T.V, if you watch your movie on a night when the room is darker, the settings will be different for a well lit room during daytime viewing, this will ensure you gain a truer calibration. The various calibration test pages take you through a SMPTE calibration bars, which help you to fine tune your brighness (used for controlling your T.V's black levels), colour and contrast. Other screens will help you adjust the sharpness, which is commonly set far too high. If you are concerned about messing up your current settings, take a note of the current numbers of each of the brightness, contrast, sharpness etc so that you can quickly and easily go back to these if you wish, I'm sure you won't if your set is not calibrated correctly.

If you are disappointed with the black levels, colour and contrasts, or even if you are suffering from other viewing effects such as 'halo-ing' whilst watching Blu Rays, I'd recommend you give this a try. Once I had calibrated my 42'' 1080p Toshiba, I re-watched the underground scene in question. Now my screen was jet black! No wash out, grey streaks, just one deep black screen that was portrayed exactly how it was meant to appear. The sharpness of the images on screen also appears far crisper now, and contrast between colours is superb.

I hope that is useful to some of you out there, I hope you do give it a try & you get noticeable results.

stan g pott
5,0 su 5 stelle Quentin Tarantino at his best
Recensito nel Regno Unito il 9 dicembre 2013
Acquisto verificato
Through Resivour Dogs nd Dusk to Dawn Kill Bill is my Favorite, the first was the better of the two but not much to separate them,pensonal choice i think.
Both films are are a joy to watch (if over 18 ) if you like films that are totaly different,not Gone with the Wind by any streach of the imagination.
These films had most of what i like in a good action movie horror/revenge/sadness/with a good sence of humor.
Will watch over nd over again
Will not say more incase youve not watched.if not have a look nd enjoy.
Leggi di più
2 persone l'hanno trovato utile
Utile
Invio valutazione in corso...
Ti ringraziamo per la tua valutazione.
Siamo spiacenti, ma non è stato possibile registrare il voto. Ti preghiamo di riprovare
Segnala un abuso
Traduci recensione in Italiano
Carica altre recensioni internazionali