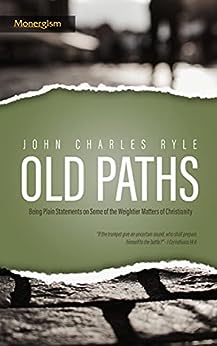 Old Paths: Being Plain Statements of Some on the Weightier Matters of Christianity (English Edition) Formato Kindle

“If the trumpet give an uncertain sound, who shall prepare himself to the battle?” - 1 Corinthians 14:8

The volume now in the reader’s hands consists of a series of papers, systematically arranged, on the leading truths of Christianity which are “necessary to salvation”.

Few, probably, will deny that there are some things in religion about which we may think other people hold very erroneous views, and are, notwithstanding, in no danger of being finally lost. About baptism and the Lord’s Supper, about the Christian ministry, about forms of prayer and modes of worship, about the union of Church and State, about all these things it is commonly admitted that people may differ widely, and yet be finally saved. No doubt there are always bigots and extreme partisans, who are ready to excommunicate everyone who cannot pronounce their Shibboleth on the above-named points. But, speaking generally, to shut out of heaven all who disagree with us about these things, is to take up a position which most thoughtful Christians condemn as unscriptural, narrow, and uncharitable.

On the other hand, there are certain great truths of which some knowledge, by common consent, appears essential to salvation. Such truths are the immortality of the soul, the sinfulness of human nature, the work of Christ for us as our Redeemer, the work of the Holy Ghost in us, forgiveness, justification, conversion, faith, repentance, the marks of a right heart, Christ’s invitations, Christ’s intercession, and the like. If truths like these are not absolutely necessary to salvation, it is difficult to understand how any truths whatever can be called necessary. If people may be saved without knowing anything about these truths, it appears to me that we may throw away our Bibles altogether, and proclaim that the Christian religion is of no use. From such a miserable conclusion I hope most people will shrink back with horror.

To open out and explain these great necessary truths, to confirm them by Scripture, to enforce them by home, appeals to the conscience of all who read this volume. This is the simple object of the series of papers which is now offered to the public.

To this statement, I frankly admit, the first and two last papers in the volume form an exception. Inspiration, Election, and Perseverance are undoubtedly points about which good men in every age have disagreed, and will disagree perhaps while the world stands. The immense importance of inspiration in this day, and the extraordinary neglect into which election and perseverance have fallen, notwithstanding the Seventeenth Article, are my reasons for inserting the three papers.

The name which I have selected will prepare the reader to expect no new doctrines in this volume. It is simple, unadulterated, old-fashioned Evangelical theology. It contains nothing but the “Old Paths” in which the Apostolic Christians, the Reformers, the best English Churchmen for the last three hundred years, and the best Evangelical Christians of the present day, have persistently walked. From these “paths” I see no reason to depart. They are often sneered at and ridiculed, as old-fashioned, effete, worn out, and powerless in the Nineteenth Century. Be it so, “None of these things move me”. I have yet to learn that there is any system of religious teaching, by whatever name it may be called, High, or Broad, or Romish, or Neologian, which produces one quarter of the effect on human nature that is produced by the old, despised system of doctrine which is commonly called Evangelical.

Joe
5,0 su 5 stelle A soul penetrating read!
Recensito negli Stati Uniti 🇺🇸 il 26 dicembre 2021
Acquisto verificato
J.C. Ryle has a way of communicating to get right to the heart. He overwhelms you with good and necessary questions that must be answered. For the unbelieving he pursues an action, for the believing he provides admonitions and encouragement.
Absolutely worth your time and study!
Leggi di più
2 persone l'hanno trovato utile
Segnala un abuso
Traduci recensione in Italiano

Robin Edenshaw
1,0 su 5 stelle Don’t buy!
Recensito negli Stati Uniti 🇺🇸 il 11 agosto 2022
Acquisto verificato
First, the 8 1/2 c 11 inch size. Doesn’t fit well on a library shelf. Too flimsy. Second, print format…no space between columns makes it hard to read and no room for notes. Looks like publisher wanted to get as much as possible on as few of pages as possible. Very disappointed. I will not be putting this on my church library shelf. The one star was for be able to see the book in person. Don’t buy!
Leggi di più

1,0 su 5 stelle Don’t buy!
Recensito negli Stati Uniti 🇺🇸 il 11 agosto 2022
First, the 8 1/2 c 11 inch size. Doesn’t fit well on a library shelf. Too flimsy. Second, print format…no space between columns makes it hard to read and no room for notes. Looks like publisher wanted to get as much as possible on as few of pages as possible. Very disappointed. I will not be putting this on my church library shelf. The one star was for be able to see the book in person. Don’t buy!
Immagini presenti nella recensione