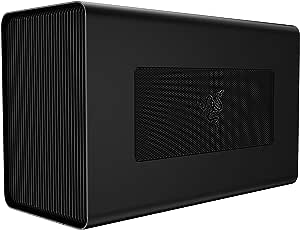 Stanislav Kozyrev
4,0 su 5 stelle Solid product with some drawbacks
Recensito in Germania il 26 febbraio 2019
Nome stile: Core XAcquisto verificato
Since my personal interests have shifted, I was in the market looking to replace a 7yo air-cooled, mildly overclocked full ATX tower with a smaller and less power-hungry alternative. I was using laptops at work for many years, so I decided to finally dump the desktop at home and switch to laptops only (plus some NUCs and a NAS). A few years ago, I’ve learned about external graphics solutions (also called eGPU or eGFX), but my initial experiments were unconvincing due to multiple performance and stability issues. So, I had to put this project aside until recently I’ve got a Thunderbolt 3 laptop. Intel’s Thunderbolt version 3 is a major step up from previous generations where the bandwidth was too limited for any real-world usage.
There is a limited choice of external graphics solutions where I live, even more so as I wanted to reuse Nvidia’s GeForce GTX 1080 Ti Founder’s Edition I had in my desktop. I was deciding between Asus ROG XG Station 2, HP’s Omen Accelerator GA1 and Razer’s Core X. The Asus dropped off the list as it was way too expensive than, say, HP’s GA1. The HP quickly followed as it had multiple build quality and stability issues according to some online reports. In the end, I went with Razer’s Core X and so far, I didn’t regret that decision. Following are my personal pros and cons after a month of daily use.

Pros:
• Very good build quality, sturdy metal case, minimum plastic parts. Feels like home after Fractal Design’s Define R5.
• Large and ample case has enough space to accommodate most Add-In-Boards with custom cooling. My GTX 1080 Ti FE fits perfectly and there is still some space left.
• Mesh side panels and a case fan provide additional cooling. My overclocked GTX 1080 Ti rarely hits 80C.
• Replaceable 650W power supply unit can feed most power-hungry cards on the market. You are still going to need a Y-adapter for MSI’s GTX 1080 Ti Lightning Z and alike unless you replace the PSU.
• Most recent Thunderbolt 3 firmware ensures a great hardware compatibility and unrestricted host-to-device bandwidth. I am using Core X with a couple of Dell’s Precisions I own and, so far, it was a flawless experience with regards to hardware support. Things like GPU switching, firmware update, monitoring, and overclocking “just worked”.
• USB-C Power Delivery support, up to 100W with compatible devices.

Cons:
• Huge and heavy metal case occupies a lot of desk space and trumps mobility. It’s almost as big as a mini ITX system but still much smaller than an average ATX tower.
• Stock PSU and case fans can be noisy while original TB3 cable is too short to put Core X away. Both can be replaced with some alternatives. Just make sure you checked online forums for any compatibility issues.
• Mesh side panels suck dust in. I vacuum-cleaned my ATX tower once in a quarter thanks to integrated dust filters, but this little guy gets dusty very quickly. Fortunately, thanks to a tool-less design, it is very easy to clean.
• TB3’s PCIe 3.0 x4 can be quite limited sometimes (depending on a used application). Twice less throughput doesn’t seem like a big deal, compared to PCIe 2.0 x16 platform I used before (yes, it was that old), but powerful GPUs like my GTX 1080 Ti or RTX series could use more bandwidth.
• Power Delivery can be tricky sometimes depending on laptop’s manufacturer. For instance, Dell laptops that require more than 65W seems to throttle when connected only to Core X. Fortunately, my laptops can still use E-series dock station or external power adapters when plugged into Core X.

With Precision M3510, it was a Plug’n’Play experience on Windows as AMD FirePro W5130M doesn’t interfere with Nvidia drivers. The Ubuntu experience was worse due to a poor quality of open-source drivers for Nvidia GPUs.
I had to disable the mobile Quadro P2000 in Precision M5530 before installing GeForce drivers, otherwise it couldn’t detect the GTX 1080 Ti. Since Quadro driver release 384, mixed Quadro/GeForce builds are officially supported, so after GeForce driver installation had completed, the re-enabled Quadro P2000 appeared in GeForce Experience along with GTX 1080 Ti. Please note that I haven’t tested professional OpenGL applications like SolidWorks or AutoCAD, so YMMV.

Overall, I am happy with Razer’s Core X as it ticks pretty much every checkbox on my list. I removed one star for USB-C Power Delivery issues since I hoped I could finally become a power-brick-free, but alas.
Leggi di più