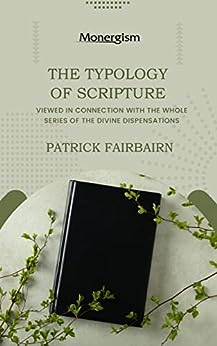 Patrick Fairbairn was a Scottish Free Church minister and theologian. He was Moderator of the General Assembly 1864/65.

To serious students of the Scripture Fairbairn’s Typology has long been a standard work. For a sane, sober, and profound exposition of the relation that subsists between the Old and the New Dispensations this book has remained unsurpassed since its appearance nearly a century ago. It is one of those really great works that have stood the test of time and can be called essential in the ministerial library. Fairbairn was one of the giants of the Free Church of Scotland who, along with William Cunningham, George Smeaton, James Buchanan and other scholars, produced a quantity and quality of Reformed literature, that has never been duplicated in such a short space of time in one country. He himself was principal of the Free Church College in Glasgow, after having served three charges as pastor.

This work is really divided into two volumes, which in the present reprint have been bound together. The print has been enlarged somewhat over the older editions, which eases the strain on the reader’s eyes, especially in the very valuable appendices. The entire work is divided into three ‘books’ of rather unequal length. The second volume is devoted to the third ‘book’ and in 470 pages discusses the types found under the Mosaic dispensation. Fairbairn treats first the typical significance of the ‘historical transactions’ such as the bondage in Egypt, the deliverer Moses, the deliverance itself, and the wilderness wandering. Then the bulk of the volume is given over to a detailed exposition of the typical symbolism of the law, the tabernacle, and the sacrifices. For the busy minister who is looking for a clear, thorough, and satisfying presentation of the Levitical sacrifices, this section is well worth the price of the whole book. And for the student who is wrestling with the critical problems involved in the interpretation of the Old Testament, the discussion beginning on page 278 will set the problem forth succinctly and with the reverent and scholarly replies. It is significant that a reviewer in the pages of this Journal recently referred his readers to Fairbairn’s Typology in reply to the claims of a modern theological work that the Levitical sacrifices had efficacy only for unwitting or ceremonial sins (cf. the issue for May 1952, p. 172).

The first volume sets forth the principles of Scripture typology and their application to the primeval and patriarchal dispensations. It is the first part of this section that is especially important, as here we find a quick rebuff to the facile solution that sees no ‘type’ except that which is specifically mentioned in the New Testament. Fairbairn defends himself by appealing to the sister study of prophecy, where, says he, ‘a part only ... of the prophecies which refer to Christ and His kingdom have been specially noticed and interpreted by the pen of inspiration’ in the New Testament (p. 21). Why then demand a special notice of each type? On the contrary, the types that are noted are singled out ‘simply as examples ... taken from a vast storehouse, where many more were to be found’ (p. 22). On the other hand, he takes issue with those who discover types everywhere, but only of a ‘superficial and outward kind’ (p. 20).

The minister and Bible student who makes a careful study of this book cannot help but have his knowledge of the Scriptures immeasurably increased. The appendices, too, will no doubt provoke much interest, especially the one entitled, ‘Does the Original Relation of the Seed of Abraham to the Land of Canaan Afford any Ground for Expecting their Final Return to it?’ (Vol. I, pp. 415 ff.).

Brian Mcgregor
5,0 su 5 stelle Immense resource
Recensito negli Stati Uniti 🇺🇸 il 10 luglio 2021
Acquisto verificato
Fairbairn was a Scottish pastor and this book was published in 1863, in the middle of the American Civil War and ten years after Commodore Perry sailed into Tokyo Harbor, so his English is very different from the current spoken English in the U.S. The book consists of three parts: an introduction to typology, typology of the patriarchs, and typology in the law.

The printed book is massive, so having it in Kindle format is a huge boon. Anyone who wants to delve into typology should also consider reading Bishop Marsh's Interpretation of the Scriptures, whose dim view of typology Patrick responds to in the section of introduction to typology.
Leggi di più
Segnala un abuso
Traduci recensione in Italiano

David W. Stroud
5,0 su 5 stelle Super work and worth the price.
Recensito negli Stati Uniti 🇺🇸 il 8 maggio 2011
Acquisto verificato
The type setting and copy work are really excellent, given that the original work is not in print. I particularly liked the wide margins for notations and marginalia. This is an excellent on-demand reprint. Kudos!

The text is one of the standards in the field of TYPOLOGY in Biblical studies. It is out of print but nonetheless very useful for students of the Bible in professional studies in preparation for ministry or for individuals who wish to enlarge their understanding of the subject to enhance their own Bible study. It is full and technical in the late 1800's meaning of those worlds.

The study is itself is "replete and compleat" with historical, intra-Biblical, and interdepartmental evaluations of TYPOLOGY. The language is ornate and intricate in Fairbairn's writing style but well worth the effort to follow. This is the two volume work published in one volume, so it is physically large. It is well bound and easily handled, with a great binding that allows it lie flat in the lap or on a desk.

Fairbairn does a very fine job of presenting the material and discussing it. I particularly enjoyed and learned a great deal from his discussion of Cherubim, for example. He deals with them from Genesis to Revelation and examines the historical process of their development, meaning and usage in the contexts of each biblical book in which they are mentioned. He discusses the Cherubim as symbol and the elevation of that symbolism in thought-provoking detail. Frankly, he presented for consideration many concepts associated with Cherubim of which I found myself woefully ignorant. Similar enlightenment was found for the various discussions of types, their meanings and development over time, and the reality that an Old Testament type fulfilled in the New Testament yet functions as a type pointing onward into the Eschaton, just as does the NT antitype. This is heady stuff.

This work has greatly enlarged my apprehension in many ways. It is one of the best purchases I have made in the field of biblical studies. I know I will be referring to it many times over the years.
Leggi di più
9 persone l'hanno trovato utile
Segnala un abuso
Traduci recensione in Italiano